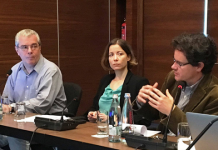 According to TV-program “Sakmis Kursi”, both pre-election and governmental program states that “moratorium is going to be announced over the introduction of the latest licenses and permits”.

“The moratorium will concern to any form of activity, except the imperative requirements, the industry subject of international agreements signed by Georgia,” the report reads.

However, there’s nothing said about such imperative requirements and wishes in the draft law on “Licenses and Permission Fees”. The authors are MPs Levan Koberidze and Kaki Zoidze.

According towards draft law, permit fee is 15,000 GEL for a period of 4 years for arrangement of cigar bar,” the draft bill reads, initiated by the Secretary of state for Health.